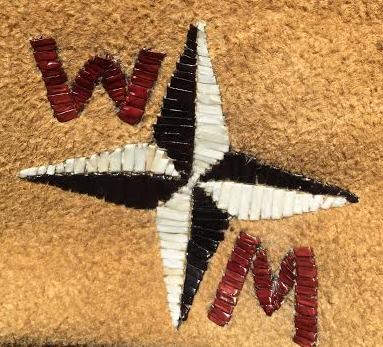 Decorated Robes of the Plains Indian

​The Indians of the North American plains were a nomadic people, following the buffalo herds of the west. This lifestyle required artistic expression to be utilitarian in nature.  One of the hallmarks of Native American culture was the decorated robe.  Decorated robes were generally made of bison hides with the hair on for winter use, and deer or elk hides for summer use.
Designs used abstract and symbolic expression to convey the religious and philosophical views of the artist and wearer.   Decorated robes are found in a great many native populations of North America.  The focus of this paper is the robes of the native populations that inhabited the Great Plains of North America.

HISTORICAL EVIDENCE
Coronado provided the earliest known record of painted hides in August of 1540.  In 1738, La Verendrye noted that the Mandan traded painted buffalo hides to the Assiniboine.  Anthony Hendry wrote of the Blackfeet painting their robes with red paint in 1755.(2)  All of these citations were in general terms, without addressing any specifics of the decoration.  The earliest detailed information came from Lewis and Clark’s Mandan robe that represented a battle from 1797(2).
Due to the problem of deterioration of the materials used in decorated robes, prehistoric evidence of painted robes does not exist today.  The oldest known plains painted buffalo robe in existence is a Mandan exploit robe painted in approximately 1800.(2)  Older robes of the Illinois Indians, currently in French collections, date back to the mid and late 1700’s.(3) 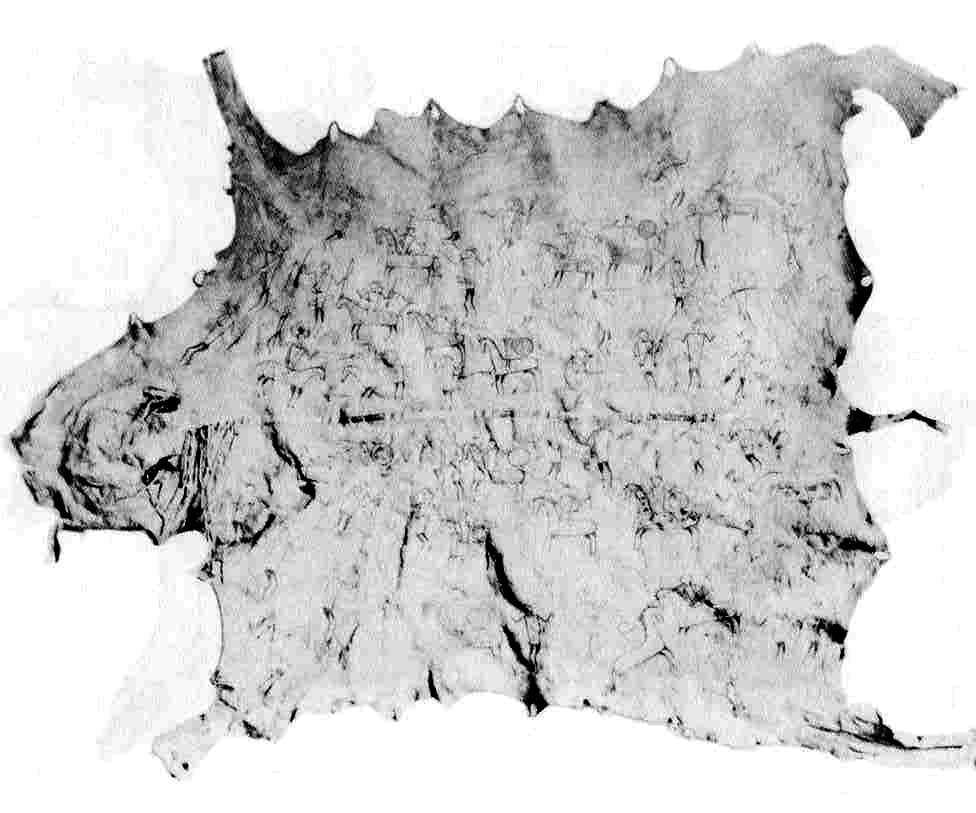 ​Painted hides were also used as objects of exchange between nations and could have changed hands often.(3)  As a trade item, painted hides were worth two unpainted hides.  Due to the exchange of ideas, traditions, and goods, it is frequently impossible to tell the exact origination of any hide(3); however, generalizations can be made based on the nature of the decoration.

PAINTED HIDES
​Both men and women painted hides.  The design was typically based on the painter, and their role in the society of the tribe.  Men were responsible for protecting and providing food for the tribe and they painted life figures in two dimensions without backgrounds.  Pictorial imagery expressed daily life, aspects of vision quests, and heroic deeds.  Women painted balanced, geometrical designs.(1,2,3)
Young unmarried women would wear robes with medallions and pendants hung along the bottom of robes.  Young unmarried men would wear robes with a single strip of quilling and four large medallions, especially the Teton Sioux.(5)

MATERIALSPigments for painting the robes were primarily obtained from earth materials, but have also been obtained from plant and animal products.  Brown, red, and yellow came from clays, black from earth or charcoal.  A yellow ocherous substance, when ground, made yellow, but if baked carefully, could also make a vermilion color.(2,3)

​      There is some debate over the use of blue prior, to the advent of white traders, but there is some evidence of blue earth pigment, as well as duck guano, being used by the Blackfeet.(1,3) Alexander Henry, a trader from 1760-1776, listed 10 different pigments used by the Piegan Blackfeet in the early 1800’s.  These colors include; dark red, brownish red, deep yellow, light yellow, dark blue, light sky blue, lead color, green, white, and charcoal.(5)   The Native artists tended to prefer the primary colors in their selection for painting robes.  Red was the most common color used in robe décor.  Yellow and blue were the next more common colors used, followed by green, then brown, then black.  Orange and purple were seldom used.(1)
The dried pigments were mixed into a liquid or semi-liquid medium. Animal fat was used to make “oil paints”(5), and glue made from boiled beaver tail or hides was used as mordant.  Glue was also used as a sealer if the pigments were simply mixed with water.  Cactus juice was also used as a binder or sealer.(2,3,5)
Specific pigments could be obtained by the various plants: Red was obtained from red osier dogwood, alder bark, buffalo berries, squaw currants, viburnum drupes, wild plum fruits, or bloodroot.  Blackfeet used the buds of the pussy willow harvested in springtime for red as well.
Yellow came from wolf moss, sumac pith or roots, goldthread roots, certain lichens, early cottonwood buds, sunflower or coneflower petals, buffalo berries, or roots of black willow.  Black pigment came from black walnuts or walnut roots, butternuts, hazel burs, hickory nuts, maple leaves and bark, or from wild grapes.  Green was obtained from pond scum or grasses.  Dark brown came from the edges of peat bogs or from the bottom of stagnant ponds (probably – brown limonite.)   Blue was rare before trade blankets were introduced.  Larkspur could possibly have been used as well to make a blue.   Violet could have been obtained from rotten maple wood or blueberries.  Light orange was obtained from dodder vines. (5)
Brushes were made from bone, horn, or frayed sticks, usually of cottonwood or willow.  The bones most commonly used were the porous edge of the buffalo shoulder blade or the end of a buffalo hipbone.  A separate brush was used for each color.(2,3,5)

​Representative Paintings
The men of the tribe painted these robes, and they were commonly seen in the central and northern plains, and less often in the southern plains.  These robes were painted in flat, two-dimensional figures with no background.  Figures were painted with the head and legs in profile, even if the body was turned to the front.  The head of the hide animal was worn to the wearer’s left with painted figures right side up.  Figures were generally scattered over the robes with no attempt to arrange figures on the hide.(1)
One type of the representative painting was the ‘winter count’ robe.  These robes were painted by the medicine men of the tribe to record important or unusual happenings in the life and times of a tribe.  Winter Count robes generally started in the center of the hide and radiated out in a clockwise spiral.(3,6)  This type of robe has been collected from the Sioux and Kiowa exclusively in which there is a monthly history of the tribe.

​Personal records or exploit robes were typically painted by men and worn by men. (1,7) There is one notation by John Hunter in writings published in 1823 in which a Kansas woman was permitted to wear an exploit robe.(4,6)  A final type of representative painting includes imaginative records or vision robes.  These are generally indistinguishable from the real event/exploit robes.  Exploit robes represented the pictographic record of a man’s personal war deeds. The figures were stylized and painted in battle scenes with many warriors, horses, and other animals. (6)
Buffalo hunts were also depicted on robes.  Since touching an enemy with a coup stick was considered braver than killing an enemy, that, along with the stealing of horses, was a favorite subject of these paintings. 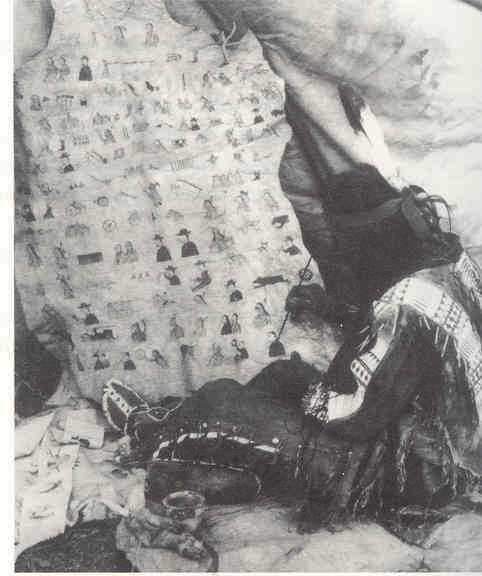 ​Humans and horses are the most common figures represented in hide paintings.  Buffalo are found on only about seven percent of paintings, with bear and deer even less often.  Dogs, although a common part of daily life, were not portrayed on any hides found.(2)

Geometric Paintings
As with other painted art of the plains Indians, the women painted geometric designs, most falling into five basic patterns; the box and border, the hourglass and border, the bilaterally symmetrical, the horizontal stripes, and the feathered circle. Given trade and exchange among various tribes of the plains, no particular design is attributed to a specific tribe, but are shared between two or more tribes within a geographical area.(7) 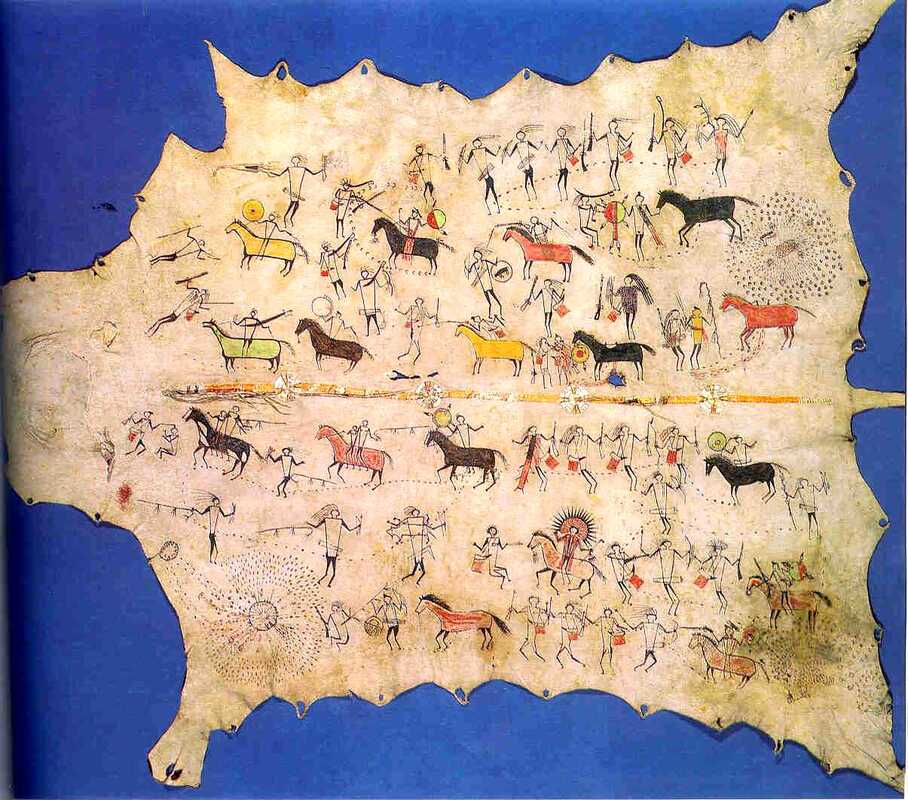 ​
Females painted and wore box and border, and hourglass and border.(7)   The box and border design was limited to the Dakota Sioux and their geographic neighbors.  The hourglass and border design is seen in the largest distribution amongst tribes, but tended to be seen more often amongst the southern plains tribes.
The Teton or Western Sioux, the Arapahoes and the Cheyenne women liked the bilaterally symmetrical designs.  This design looks like two facing E’s with four legs.  The patterns generally consist of narrow lines, small triangles, and dots.  The pattern is also seen in the Arapaho tribes as well.(7)
The horizontal stripes design features narrow bands.  Most hides would have between 5 and 11 stripes.  The stripes can consist of simple lines of color, to elaborately decorated narrow bands.  This design pattern was seen predominantly in the Blackfeet and Sarsi tribes.  Blackfeet sometimes called this pattern a “marked robe”. (1,7)

​Women also painted feathered circles or black bonnet on robes that were considered to be worn by the men.(7)  Bodmer painted a woman wearing a feathered circle in his painting of the Minnetaree Tribe.  The women of the Buffalo Society were featured performing the Scalp Dance.(8)  The feathered circle was only seen in the Siouan tribes and their neighbors.(2)
There are a few robes painted with geometric patterns that do not fit into any design standard from various tribes including the Blackfeet, Arapaho, Osage, and Taos.  Records appear to indicate that they were either decorated to be equipment in games or as medicine robes, which required unique decoration.  These robes were rare.(2)
There are several hides, which were originally painted in geometric pattern where one can also find realistic motifs that have been added later.  These include a Sioux made feather star with figures.  Another is an Apache hourglass form combined with life forms.
There is no record of geometrically painted robes from the Assiniboine, Bannock, Gro Ventre, Plains Ojibwe, Omaha, Oto, Kansas, or Iowa Indian tribes. (2)

QUILLED HIDESQuillwork was done with either porcupine or bird quills.  Due to scarcity of porcupine quills, the Cheyenne would occasionally substitute various grasses for quills.(7)  Maidenhair fern was used for black. The Kiowa had little to no quillwork due to lack of porcupines.  For the Cheyenne, quilling of robes was a sacred occupation done only by select women of the quiller’s societies.  They felt that quillwork encompassed great spiritual and symbolic actions and meaning.(7)

​Many tribes tanned buffalo hides by cutting them in half down the middle and then sewing them back together when completed.  A single quilled strip was frequently used to cover this seam.  The Cheyenne would add a medallion or rosettes of quillwork along the strip.(7) The Assiniboine would place a large rosette on the front and back ends of the strip on the robe.  The Arikara would place the rosette at the end of the strip. The Blackfeet would also simply paint the seam red.(1)
Another design frequently seen were robes with a multitude of horizontal single rows of quillwork across the length of the robe.  Bits of feathers or wool would also be seen added along these lines for embellishment. (2,8) 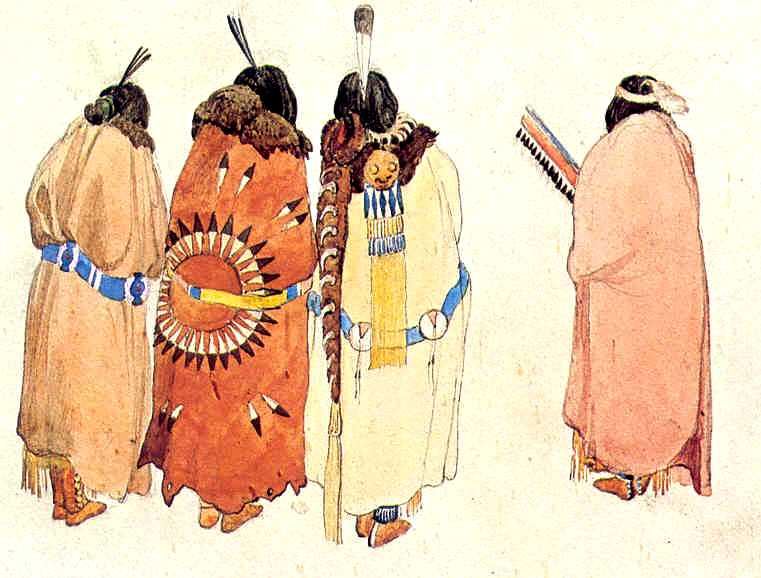 From Karl Bodmer – documentation indicated that these are Minnetaree women of the
white buffalo society performing scalp dance dressed as warriors. (8)

​The Indians of the North American plains were a creative and artistic people whose utilitarian art on decorated robes demonstrates and preserves their traditions.

I relied heavy on J. Ewers book entitled Plains Indian Painting.  It is an excellently researched and well-referenced book.  I highly recommend it to anyone looking to expand his or her personal collection.